A headline in the West Briton & Royal Cornwall Gazette of December 1902 reports: “Truro Fat Stock Show – The Biggest in the County”. The newspaper article went on the say “ In past years the Christmas Fat Stock Show at the old Cattle Market of Truro, lacked importance due to the size of the city, and it was only through individual generosity and business foresight that any interest was taken in the Annual event. This year, (1902), with a new and commodious cattle market, it occurred to a few enterprising citizens of Truro that the time had come when a proper Truro Fat Stock Show should be held. This was taken up by the Truro Mercantile Association and a Fat Stock Society formed.”

The Show continued at the Cattle Market until in 1907 under the Presidency of Mr Charles Williams and the Royal Cornwall Gazette reported “The members were congratulated upon their wisdom in changing the venue of the Show to Truro’s Market House”.

The Annual Christmas Fat Stock Show was a very big day for Truro and was referred to as “The day the Country Comes to Town”.  An important part of Show Day was the Dinner held in the Red Lion Hotel (see photographs in Gallery) and the dance held in the evening. From newspaper reports these must have been very lengthy affairs as at the first Dinner in 1902 there were nine toasts! A cattle judge at the 1957 Dinner thought the time had come when an age limit ought to be instituted because “Cattle should be fat enough for exhibition by the time they had 6 teeth. We do not want museum pieces!”.

The Show continued annually in Truro City Hall apart from breaks for the two World Wars and foot and mouth disease in 1967. However in 1985 safety regulations and the proposed development of the City Hall into what is now the Hall For Cornwall, forced the Society to search for a new site.

There was no alternative but to move to the new Livestock Centre on the outskirts of the city which had been opened in May 1983. By this time the Show, in keeping with most Christmas Shows in the country had changed its name to Primestock rather than Fatstock to the dismay of many traditionalists who felt that meat needed some fat on it to give it flavour! In 1990 it was decided 2002 was a very important year. It was the year of the Queen’s Jubilee, the 125th anniversary of Truro becoming a City and the year Truro Christmas Primestock Show celebrated its Centenary. The Society members felt that it would be a wonderful way of celebrating the Centenary if we could get the whole Show back into the City Centre. Lemon Quay had just been redeveloped with modern shops and a large open public piazza which it was felt lent itself for the erection of a large marquee. The committee approached the various local authorities and with the enthusiasm and support of Truro City Council, Carrick District Council, Cornwall County Council, the police, fire brigade , DEFRA, Aussie Marquees and many others, the Show returned to the City Centre.

The vision and hard work of the Show Committee at that time meant that the Show regained its distinctive place in the life of the City which had been missing for 18 years. In our Centenary Year we were honoured to have as our President the Bishop of Truro, the Rt. Rev Bill Ind who in his year of office was a tremendous supporter of the Show. Show Day in 2002 commenced with a wonderful spectacle when the City Coroner Mr Edward Carlyon exercised his right as Freeman of the City to drive sheep through the city. Accompanied by The Bishop, the Mayor Mr Ron Cooke, the Society Chairman Mr David Elliott and 3 Border Collies, six Dorset sheep were driven through the city from Victoria Square to the Show Marquee on Lemon Quay to the amazement and enjoyment of many spectators.

The Centenary Show was so successful that it has since continued to be held in a marquee in the city centre and has gone from strength to strength. The Show is thought to be unique, believed to be the only Christmas Primestock Show held in the centre of a city. Where else would cattle lorries be seen loading and unloading immediately in front of major retail shops. The Show has become a very important event on Truro’s calendar and once again it can proclaim, as it did over 100 years ago, that Christmas Primestock Show Day is “The Day the Country Comes to Town”. 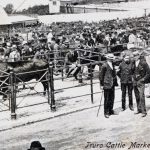 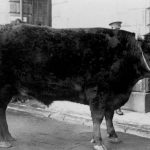 Truro Primestock is holding their AGM on Tuesday 19th April at 7.30pm at St Erme Community Centre. Everybody is welcome ... See MoreSee Less 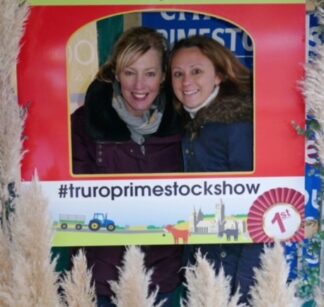